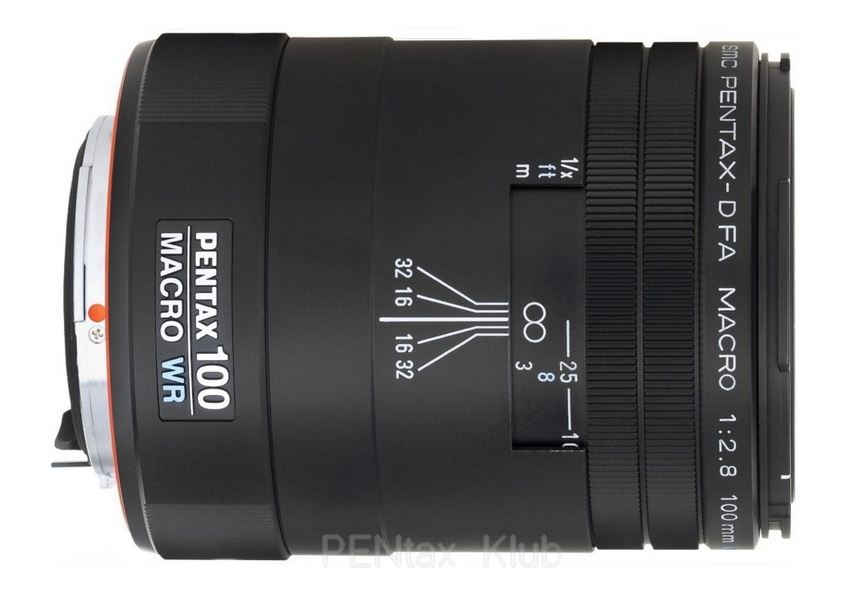 Their optical formula appears to be strictly identical.

The main differences between them concern :

We will not mention here their predecessors with exclusively manual focusing, even if, in macro, autofocus is not an essential feature.

It is a rather light lens (340 g without the lens hood), with a focal length that is typical among macro lenses. The focal lengths of these lenses usually range from 90 to 105 mm. But more and more lenses are available with focal lengths slightly longer: 150 mm (Irix, Sigma) or even 180 mm (Sigma). Unfortunately, the only one available in K-mount is the Irix.

Its lens hood has a « classic » shape (tubular rather than tulip-shaped) – Ref. PH-RBE49.

The lens coating is smc type (no « modern » HD or AeroBright coating).

What is surprising at first glance is the small size and lightness of the lens. At only 8 cm in length, a maximum diameter of 6.5 cm and a weight of 340 g, you don’t feel it much in your tote bag when you’re not using it.

The minimum focusing distance is 30.3 cm, typical for macro lenses of this focal length.

It has no diaphragm ring so, the aperture which can exclusively be adjusted from the body. Manufacturers choose this solution more and more often, no doubt as a price to pay for the modernity made necessary by the evolutions.

However, this is regrettable: in fact, it prohibits the use of extension rings to increase the magnification ratio, since it will then be impossible to choose the diaphragm aperture, because the necessary contacts are not transmitted… unless extension rings equipped with these contacts are available. In fact, they are very rare. Pentax marketed them a few years ago – at a dissuasive price (almost… 1000 €!) – but they have disappeared from the catalogue. It is still possible to find second-hand ones, but their owners very rarely get rid of them. Otherwise, there is still the possibility of trusting those of independent manufacturers. Unfortunately they are also very rare.

It is also regrettable that this lens does not have a « clamp » button to lock the choosen focusing distance, nor a button to limit the focusing range. This device avoids the long back and forth of the autofocus in the search of the point, especially in difficult light conditions. The consequence, together with the long stroke of the macro lens ring, is the time needed for focusing and therefore also the duration of noise.

The D FA 100 mm f/2.8 Macro WR consists of 9 elements in 8 groups. The manufacturer does not indicate the presence or not of special glasses (such as ED glasses).

The bayonet of this macro lens is made of metal. Precision-machined and waterproof, it allows the D FA 100/2.8 Macro lens to fit perfectly and without any play on the body.

As for the barrel, it is made of high quality polycarbonate which does not give rise to any particular criticism. It ensures that the lens is light enough for the camera and at the same time robust. The focusing ring at the front of the lens is sufficiently wide and is covered with a rubberised, ribbed, double-crown cover with a pleasant touch.

No SDM engine for this lens launched in 2009, which largely explains its light weight (340 g). The AF is therefore driven by the body. This, as well as the absence of a focus range limiter (see below), does not favour silent operation,

This D FA 100mm is equipped with the Quick Shift feature, useful on a macro lens only when AF is to be used. But generally, in « precision » macro, manual focusing is the rule.

This version of the D FA 100/2.8 Macro is WR (Water Resistant), therefore « tropicalised »: this means that it can be used in humid conditions, but not underwater. The previous version was not tropicalised, but had an aperture ring that the lens under test doesn’t have.

The autofocus of macro lenses is said to be slow compared to that of conventional lenses. This is completely normal, the lens movement must be extremely precise. This is confirmed by the stroke of the MaP ring (in manual mode).
Even if it is relative, at least in some contexts, this « slowness » is nevertheless real. However, AF mode is not widely used in macro photography and photographers often prefer manual focus, and they are right. The length of the ring travel may surprise the uninitiated, but not those used to macro lenses.

If, however, in this context the AF is to be used, the Quick Shift function would provide greater precision by allowing the focus to be « fine-tuned ».
It should be noted, however, that the autofocus via the camera body (Screwdrive) is not the quietest there is. It is not impossible to think that this could be a problem in macro photography for living creatures (insects, reptiles, etc.) and even in close-up animal photography (birds).

PENtaxKlub does not have a laboratory. Our tests are not measured by tools. We wish to bring a user and essentially photographic point of view. Our comments and technical note are therefore the result of a visual analysis.

Please note that for any lens, even the best one, it is always possible to obtain visual imperfections (especially with CAs), whatever the focal length and/or aperture.

All the photos used for the tests were taken in RAW (DNG). Unless explicitly mentioned, undeveloped and unretouched.

Any lens is likely to produce chromatic aberrations (CAs) and flare.

CAs appear as a purple (or green) fringe, unpleasant to the eye. They form when the 3 colors of white light (Red, Green and Blue) pass through a lens, separate and do not meet in the right place to produce a sharp image.

Flare occurs in certain light conditions, such as when the sun sends its rays at an angle to the lens.

This is why we prefer to judge a lens in common and not exceptional image situations.

The chromatic aberrations (CAs) are extremely weak, very difficult to discern with the bare eye. However, at 100% image magnification, slight purplish fringes can be seen. A slight post-processing will easily overcome this.

It should be noted that in macro use, which is the preferred field of use of this lens, these eventual CAs would not be visible at all in the vast majority of situations.

Lenses for macro use are known to be constructed to minimise or even eliminate distortion. This is true case with this D FA 100 mm f/2.8 WR, and in normal use, no distortion is apparent.

Whatever the objective, including the most expensive ones, if you place yourself in conditions that favour them such as strong backlighting or sun in the field at 45°, flare phenomena can appear at large openings. They generally disappear after 1 or 2 f-stops down.

Nowadays, however, lens treatments (HD or aerobright at Pentax) usually eliminate parasitic reflections and flare phenomena are becoming rare. One would almost hope for an HD version of this lens.

Our test conditions for this DFA 100 macro did not show any, as the sun was not present.

Sharpness and contrast are what you would expect from a good macro lens: they are excellent from f/4 (f/2.8, sometimes a little « soft ») and, as is often the case with Pentax, reach their maximum from f/5.6 to f/8.
However, smaller apertures are very usable up to f/11. As usual, from f/16 and up, there is a drop in performance, but this is not catastrophic in non-macro use. In macro, where the best sharpness is sought, it is better not to exceed f/11. And even at this aperture, in some cases, the bokeh will not be the smoothest one.

With a macro lens, the homogeneity of definition is virtually guaranteed over the entire field it covers. The D FA 100mm macro lens is no exception to this « rule ». It delivers excellent results in terms of image homogeneity.

This can be different with non-macro lenses, which are often slightly weaker at the edges of the image than they are in the centre.

These pictures show the progressiveness of the bokeh, which is pleasant especially at large apertures.

With an APS-C sensor

We have said it many times: when you own an FF camera, operating it in APS-C mode is not normal, unless the lenses used are exclusively dedicated to the APS-C.

With a macro lens, it’s a bit different. Very often, the aim is to gain depth of field, which is by nature reduced in this context. We also know that a lens used in APS-C has a reduced field of view compared to the same lens used in FF, because it behaves like a lens with a focal length of 1.53 longer (at Pentax). The advantage of this in macro is immediately obvious, even if the final bokeh may in some cases suffer a little (equivalent to about one f-stop value).

As for the D FA 100 mm f/2.8 Macro WR, it does not show any special behaviour when used in APS-C mode on the K-1. It then behaves like a 153mm FF lens on an FF body. As such, one might therefore be tempted to compare it to the IRIX 150 mm f/2.8 macro. But this comparison would be biased: on an APS-C camera, the IRIX would behave like a 225mm and not like a 150mm, and a comparison of Pentax 100 macro on APS-C vs. IRIX 150 on FF would make no sense, as the sensors are very different.

The Pentax D FA 100 mm f/2.8 Macro WR is sold, at the date of this test, at the official price of €599. At a focal length around 100 mm, there is currently only one lens on the new market that can compete with it. It is the Samyang 100 mm macro f/2.8 ED UMC sold for about 460 €. Please note that this lens has an exclusively manual focus and operation: the photographer will have to know how to choose the right combination of aperture/speed/sensitivity and how to focus accurately. Moreover, it is not protected against dust and humidity, unlike the Pentax.

Now, but only on the second-hand market, you can find:

Other 100 mm macros are available from independent suppliers, but unfortunately not in K-mounts and derivatives (KAxx).

At the end of 2020, Laowa (Venus Optics) announces the upcoming KA-mount release of its 100mm macro allowing a 2:1 magnification ratio. Wait and see !

The Pentax D FA 100 mm f/2.8 Macro WR is unquestionably an excellent lens. Especially designed for macro, it also excels in other contexts, such as portraiture. However, it is very precise and models may not appreciate all the small imperfections it can reveal. It is up to the photographer to act in such a way that they are not visible.

Many enthusiast macro users regret that Pentax no longer has a macro lens with a focal length of 200 mm to complete its « macro » range. They hope – perhaps naively – that this will be remedied in the coming years.

All photos in the gallery belong to their respective authors and have been developed.

Photo credits: © Micaz – The pictures are the property of the author (unless otherwise specified) – Click to enlarge

Any cookies that may not be particularly necessary for the website to function and is used specifically to collect user personal data via analytics, ads, other embedded contents are termed as non-necessary cookies. It is mandatory to procure user consent prior to running these cookies on your website.