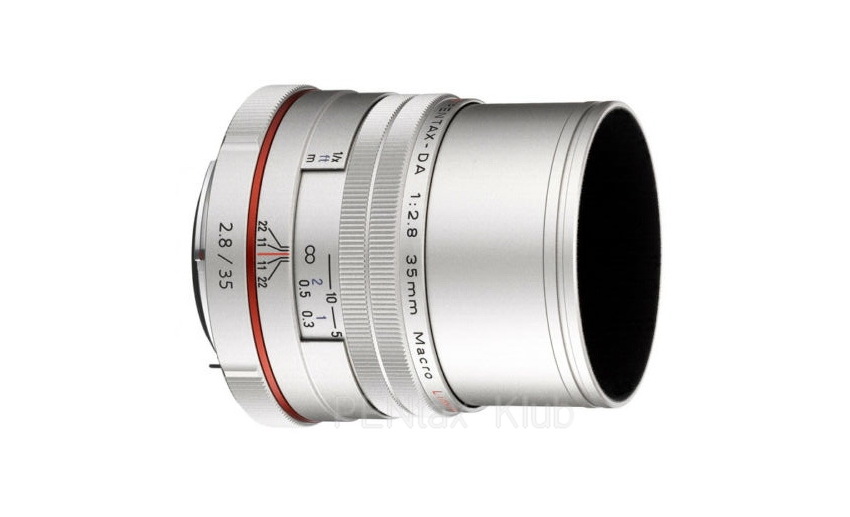 The Pentax DA 35mm f/2.8 Macro Limited lens is not a new one: it was launched on the market on August 28, 2013. It is a HD (High Definition) version of its predecessor of the same name (but without the ‘HD’ designation). The features are identical. Externally, the main difference is the presence on the barrel of a green border on the old one, and red on the new one.

It is available in two versions, a black one and a silver one.

A first « contact » was made with this lens in a comparative study in March 2016.

You can go to conclusion directly.

The Pentax DA 35/2.5 macro Ltd belongs, as its name indicates, to the Limited series which is characterized by a very high level of manufacturing and some particular improvements: imitation leather case, covering front cap, not clipped, but, for the blow, easy to lose!

It is mainly intended for « macro » use, but can also, of course, be used for street or landscape photography. Note that, as with any macro lens, the travel of the focusing ring is quite long, resulting in a relatively slow autofocus.This is not a problem for landscapes – which by definition don’t move – but it can be more of a handicap in street photography. Working with manual focus and using the hyperfocal lens can help overcome this disadvantage.

Typically, the maximum aperture of macro lenses is f/2.8. The DA 35 is no exception to this « rule ». Experience has shown that when you consider the minimum focusing distances at the 1:1 magnification ratio, this is not a handicap. A refinement that has since been widely used by Pentax is the « quick shift » feature that allows you to manually adjust the focus made in AF. In macrophotography, this is very useful, especially when you shoot small insects that move a little (Eh ! we’re not talking about flying butterflies !).

The lens is light: 214g, which is not so much considering that it has an integrated lens hood. It is not protected against bad weather. This means that it does not have an AW (« All Weather ») finish. Only the front lens is protected by an « SP » (« Super Protect ») finish.

The usable filters are 49mm in diameter and can be screwed on. They are therefore small and easily available. However, if the lens hood is extended, the use of filters will become almost impossible.

The lens comes with a small soft leatherette case.

This lens is easy to handle: it is small and light. The focusing ring is wide, looking like 2 fluted « crowns ». Its rotation is smooth and precise, favoured by a rather long stroke.

Of course, like most modern lenses, the DA 35mm f/2.8 Macro Limited has no diaphragm ring: the aperture is set from the camera. Therefore, it is not possible to use manual extension rings. However, Pentax does not manufacture any longer extension rings with the necessary electrical contacts to transmit the aperture values. And on the adaptable market, even of Far Eastern origin, they are extremely rare in K-mount. Of course, this is a marginal use, but otherwise we will have to resort to other solutions.

There does not exist any button to switch between AF and manual focus: the switch is made with the small lever on the body. In use, this is not a penalty.

The optical formula scheme of the HD DA 35mm f/2.8 macro Limited is as follows :

No information seems to be available, either from the manufacturer or elsewhere, concerning the glasses used for the lenses. It is only just known that the old coating has been replaced by an HD (High Definition) coating which improves colour rendering and contrast.

The lens diaphragm has 9 blades. They are rounded from f/2.8 to f/5.6. Thus, the circular aperture favors the melted and harmonious bokehs.

This lens has no motor: the screw-drive type focusing is therefore operated by the camera. It is neither very fast nor very quiet. And it doesn’t help a lot to take pictures of fearful insects. Moreover, as you get closer to the minimum focusing distance (13.9cm) to reach the 1:1 magnification ratio, the lens lengthens noticeably.

As on all « Limited » lenses, the bayonet of this HD DA 35mm is metallic. This is a guarantee of quality.The owners of this lens can feel reassured, but, to our knowledge, the polycarbonate bayonets of some DA lenses (35mm f/2.4, 50mm f/1.8) have never caused any problem.

The materials used for the manufacturing are similar to those of the other lenses of the « Limited » series: metallic alloy covered with a black or silver paint depending on the version. All the serigraphic informations appear clearly and their resistance to wear must be emphasised. The finish is of a very high standard. The assembly is flawless, with remarkable precision.

PENtaxKlub does not have a laboratory. Our tests are not measured by tools. We wish to bring a user and essentially photographic point of view. Our comments and technical note are therefore the result of a visual analysis.

Please note that for any lens, even the best one, it is always possible to obtain visual imperfections (especially with ACs), whatever the focal length and/or aperture.

All photos used for the tests were taken in RAW (DNG) and, unless explicitly mentioned, have not been developed or retouched.

As a general observation, we can see, classically, a clear overall decrease in sharpness from f/16 onwards, probably due to a diffraction effect.

Chromatic aberrations (CAs) appear as a violet, sometimes green fringe, unpleasant to the eye.
Any lens is likely to produce flare. Especially if you do everything you can to have it, such as facing the sun, which sends its rays obliquely onto the lens. This is why we prefer to judge a lens in common and not exceptional image situations.

In such a situation, the DA 35mm f/2.8 Macro Limited is not better than many others: you can easily get CAs (purple in our case) at full aperture. They can be seen above in the 100% extract at f/2.8. However they fade and disappear by closing the diaphragm one or two stops. That being said, when they are present, their correction is easy in post-treatment.

As for flare, the test shooting conditions did not allow for the production of flare. This is to be welcomed, as correction is much more difficult and sometimes downright impossible: it will therefore have to be accommodated or avoided as soon as the shot is taken. That’s what we’ve done, even if it’s completely unintentional!

Using the lens in macrophotography, it is almost impossible to obtain vignetting in a 1:1 ratio. This is different from conventional shooting. As can be seen in the distortion images above, vignetting is apparent at all angles at the widest aperture (f2.8). However, it can be corrected very easily with common post-processing software. It disappears by closing even one aperture.

Quite frankly, it’s almost impossible to the naked eye to detect any distortion, whether it’s barrel or pincushion distortion. Probably you would have to use laboratory machines to make sure there was no distortion at all. In normal shooting conditions, and especially in macro photography, it is easy to see that there is none !

This is a discriminating factor for measuring the quality of a lens: one always looks for perfect sharpness both in the centre of the image and at the edges.

To do this, the tester took three pictures of the same subject, keeping the same focus: the first with the subject in the center, the second by moving it (by framing, of course) to the right of the image, and the third by moving it to the left.

Please, note that, at full aperture, pictures with an off-center subject are very rarely as sharp as those with a centered subject. And that’s what happens with the DA 35mm f/2.8 Macro Limited open at f/2.8.

So, a second set of three images was taken at f/5.6, the aperture commonly used in « real life », using the same principles.

It’s a Macro lens, so sharpness reaches of very high level… at least as long as the operator doesn’t shake! Because it’s well known that the slightest micro shake at the 1:1 magnification ratio results in blurred movement.

As with a portrait lens, the bokeh of a dedicated macro lens must absolutely prove to be melted, « creamy » as the specialists say. But it is also very dependent on several factors: aperture (less sensitive in macro than in conventional photography), focusing distance and, above all, distance of the subject from the background: the larger it is, the more the bokeh will be melted. In the case of the DA 35mm f/2.8 Macro Limited, the bokeh should have been measured at the minimum focusing distance, i.e. at the 1:1 ratio.This is an impossible task: at 13.9cm from the subject (and this distance must be appreciated in relation to the sensor plane) everything that is not the subject is blurred, or even non-existent in the picture since the subject is supposed to occupy the entire sensitive surface.

So we made 2 series of shots, with a regular subject, but which is not usually photographed in macro. The first shot is taken at about 80cm (2.6 feet), the second at about 30cm (12 inches). The images were taken at full apertures, from f/2.8 to f/8. Beyond f/8, it is of little interest for such a subject.

Up to f/4, the bokeh is pleasantly melted, thanks to the 9 blades of the diaphragm (rounded from f/2.8 to f/5.6). Beyond that, it is less interesting, at least in the circumstances of the shot: the background appears clearly, although located at about 4m behind (13 feet).

With a Full Frame camera

Used on a FF camera (K-1 Mk II), in FF mode of course, the DA 35mm f/2.8 Macro Limited produces significant vignetting at all apertures. This lens is therefore not recommended for use with a full-frame sensor camera, except to use only the central part of the image. This is sometimes possible when using a macro lens.

In France, the catalogue price of the DA 35mm f/2.8 Macro Limited is 649€. You can sometimes find it cheaper at « discounters ».

Let’s face it, if the major manufacturers have a 35mm macro in their catalogue (Canon even has a hybrid version opening at f/1.8), there is NO competitor in Pentax mount, even independent manufacturers whose older ones don’t make K-mount lenses anymore. And in the new ones (Irix, Laowa,…) no 35mm macro lens.

In this situation, we can therefore understand the rate charged by Ricoh. However, it is a rate that we consider high for the following reasons :

In the end, it is perhaps the combination of these two uses for a single lens that could justify the selling price.

If it weren’t for the homogeneity and vignetting and CAs at full aperture, this lens would almost be a « full cardboard ». It’s not perfect, of course, but apart from its high line construction, sharpness is tha main quality you’d expect from a macro lens. Moreover, in this use, the bokeh can be excellent if you take care to keep the background away. What more could you ask for if not a slightly lower price?

The photos in the gallery may have been developed.

Photo credits: © Micaz – The pictures are the property of the author (unless specified) – Click to enlarge

Any cookies that may not be particularly necessary for the website to function and is used specifically to collect user personal data via analytics, ads, other embedded contents are termed as non-necessary cookies. It is mandatory to procure user consent prior to running these cookies on your website.